The five Formations of strata that make up the surface rock of the Maltese Islands originally formed as carbonate sediments deposited on the sea bed of the Pelagian Spur during the Oligocene and Miocene epochs (from about 30 to 5 million yeas age). The area where the Maltese Islands would subsequently appear was positioned some distance from land. For this reason, sediments that accumulated during the Oligocene and Miocene were made up almost entirely of material formed in the sea itself, largely consisting of skeletal remains of the animals and plants. The Maltese Islands emerged above sea level during the Quaternary and terrestrial deposits occasionally accumulated.

The rock layers making up the surface geology, consist of five main Formation laid one on top of the other in a layer-cake sequence. The constituents and depositional environments of these Formations are described below.

Lower Coralline Limestone is the oldest exposed rock in the Maltese Islands.

The Formation forms steep sided cliffs in the western coastal areas of the Maltese Islands. It is mainly composed of the tests of coralline algae suggesting deposition in a shallow gulf environment. Younger beds show evidence of deposition in more open marine conditions. Benthic foraminifera (fossils of organisms that live near the seabed) are frequent. Some characteristic fossils found, include Large Archaeolithothamnium coralline algal rhodoliths, locally associated with strombid gastropods and bryozoa. Also Scutella echinoids form charasteristic beds in some regions and Terebratula brachiopods are also found.

The Formation is further divided into 4 members, namely (from bottom to top), the Magħlaq, Attard, Xlendi and Il-Mara Members, named after the region that are mostly exposed.

The Formation is important as it holds fresh water reserves and has economic value for the construction industry. 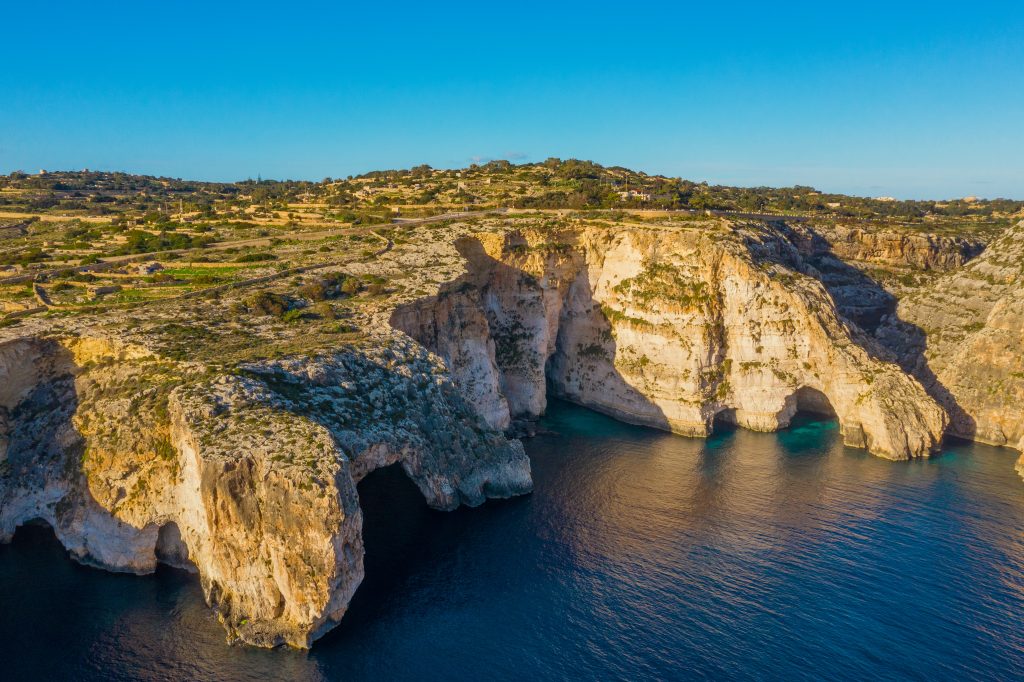 Globigerina Limestone is the second oldest rock, outcropping over approximately 70% of the area of the islands, eroding to give a broad, gently rolling landscape. This rock consists of yellow to pale-grey limestones comprising tests of planktonic globigerinid foraminifera (deposited in deeper waters than the underlying Lower Coralline Limestone). Variations in the thickness of this Formation are considerable, ranging from 23m near Fort Chambray, Gozo to 207m around Marsaxlokk, Malta.

The Formation is further divided into Lower, Middle and Upper Globigerina Limestone members by two beds of phosphorite pebbles.

This Formation provides the building stone (named “franka” in Maltese) with which many Maltese buildings are made and which was also exported to be used for the same purpose. 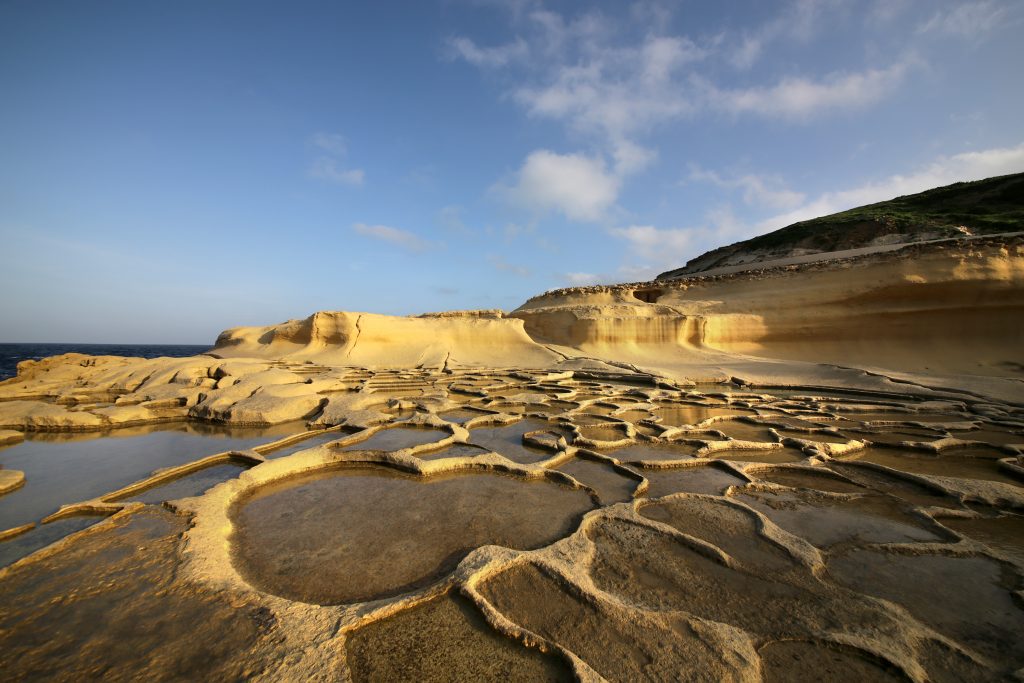 Blue Clay overlies the Globigerina Limestone Formation. It erodes easily when wet and forms taluses which flow out over the underlying rock. Deposition of the Blue Clay may have occurred in an open muddy water environment with water depths up to 150m for the lower part of the Formation. Blue clay mainly consists of fine lime grains and kaolinite, a clay mineral, which make the layer compact when dry and plastic upon wetting by water. The plastic characteristics of clay makes it unstable. Variations in thickness are considerable ranging from 75m at Xaghra, Gozo to nil in eastern Malta, where Upper Coralline Limestone rests directly on Globigerina Limestone. Foraminifera are abundant throughout, with species of Globigerina and Orbulina being the most common. The remains of marine vertebrates, including Phoca, dugongs, and many fish, are also present. Also Goethite (an iron-bearing hydroxide mineral) concretions are common in the upper beds of North West Malta.

The impermeability (restricts water flow through) of the Blue Clay is crucial for the development of the preced aquifers and it acts as a trap for freshwater. 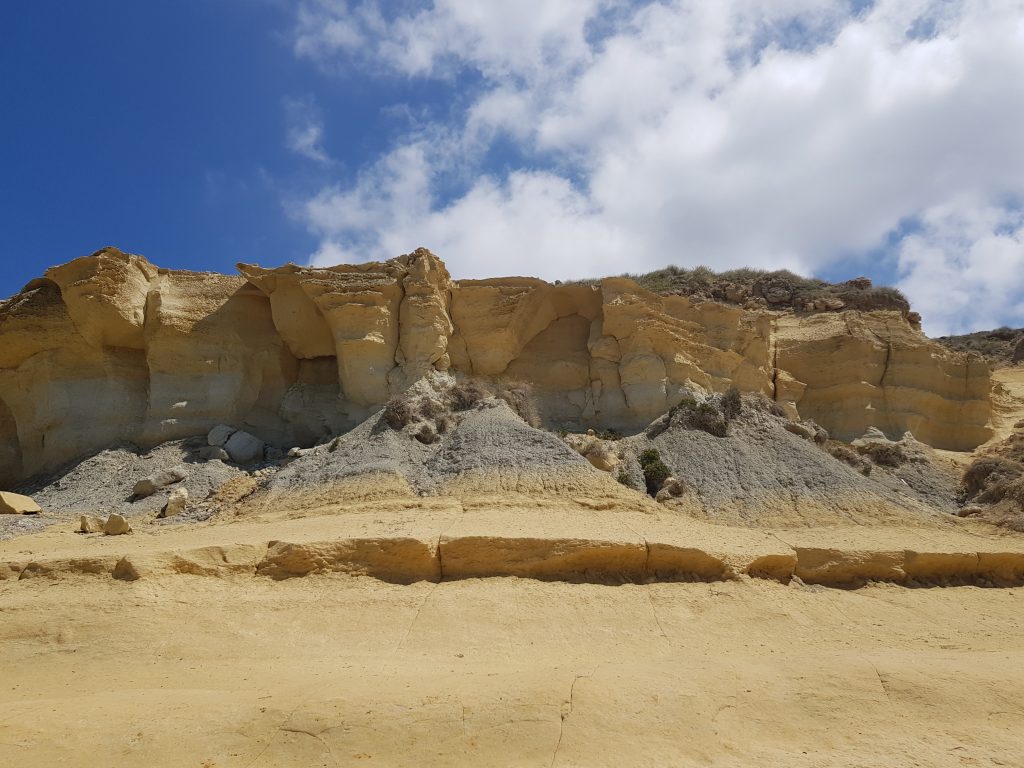 Greensand consists of bioclastic limestones rich in glauconite deposited in a warm sea. Unweathered sections are green but are oxidised to an orange colour when exposed. The deposit is much thinner than the other four Formations, it attains a maximum thickness of 11m in localized depressions at Il-Gelmus in Gozo, but elsewhere is less than 1m thick. Indigenous faunas are sparse but include Clypeaster echinoids, bivalves and local Heterostegina. Reworked moulds and casts of a diverse older Miocene marine fauna are locally common but are phosphatised or glauconitized.

Upper Coralline Limestone is the youngest Tertiary Formation in the islands reaching a thickness of approximately 160m in the Bingemma area, Malta. It resembles the Lower Coralline Limestone both chemically and palaeontologically, indicating deposition in shallow waters. The transition from the underlying greensands is gradual, sometimes merging into red and black granular sandstone, or red and white coralline rich limestone, which passes into a white calcareous sandstone-compact, soft or porous but always rich in organic remains. Though some layers are completely crystalline and have lost traces of the organisms from which they originated, other portions are highly fossiliferous containing casts of shells and other organisms. 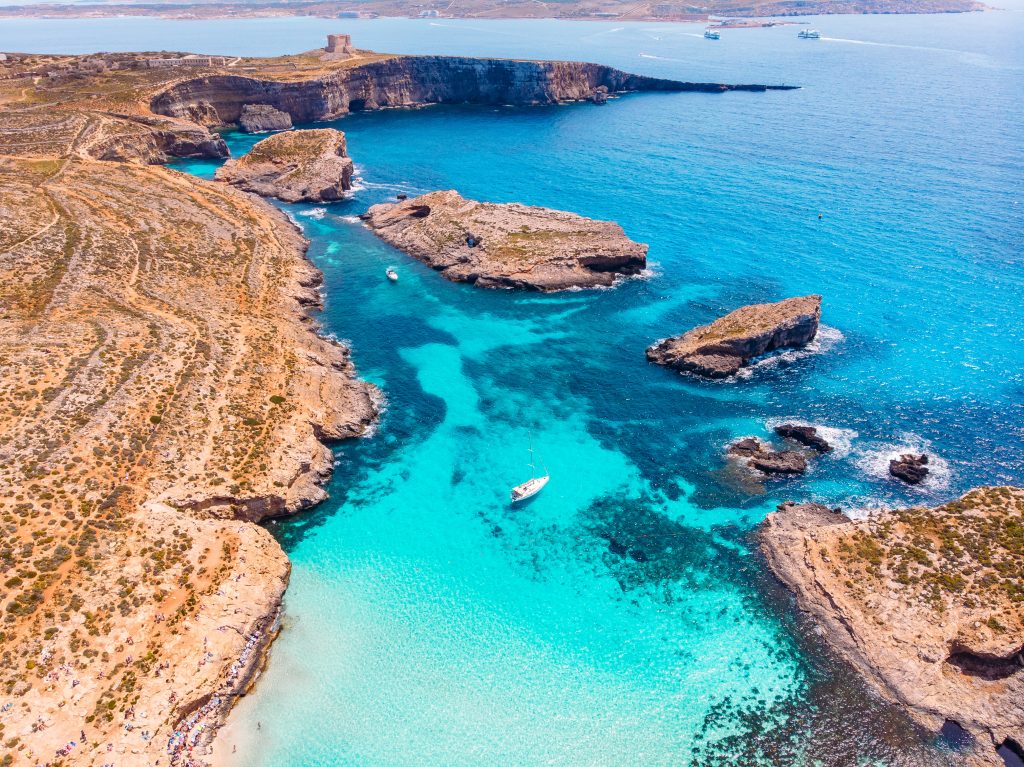 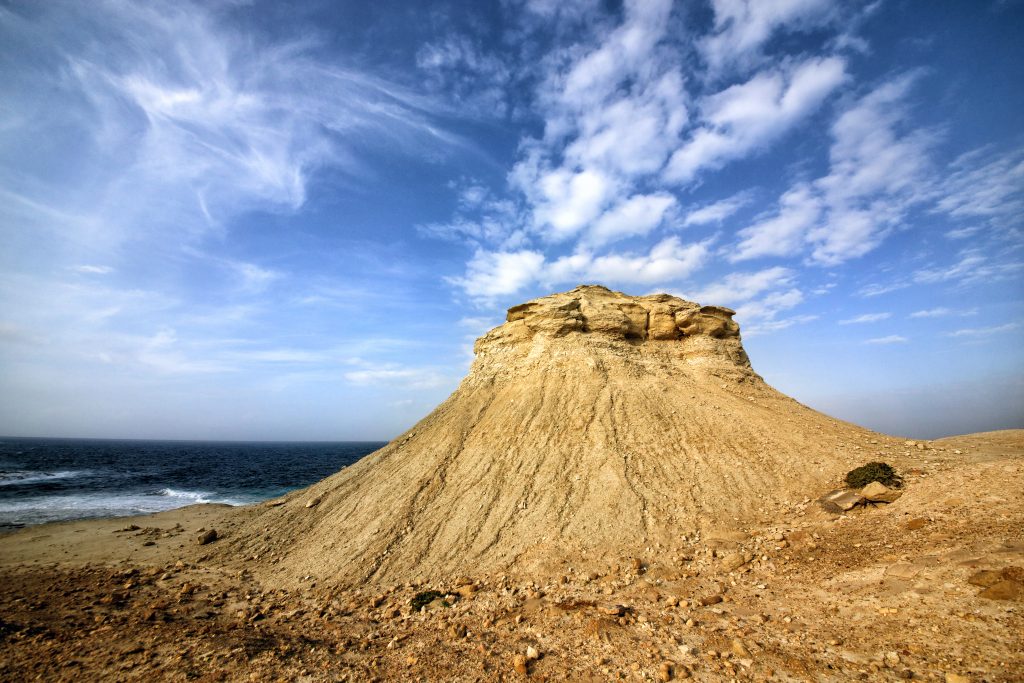